For the purpose of acquiring the [X] group (the target), the French Investment Fund set up three legal entities in the Netherlands, [Y] UA, [B] BV, and [C] BV (the acquisition holding company). These three joint taxed entities are shown as Fiscal unit [A] below.

On November 22, 2010, the French [F] Sàrl controlled by the French Investment Fund agreed on the acquisition with the owners of the target. “Before closing”, [F] transferred its rights and obligations under this agreement to [C], which purchased the target shares on January 21, 2011 for € 265 million, which were delivered and paid on January 31, 2011. As a result, the target was removed from the fiscal unit of the sellers [G] as of 31 January 2011 and was immediately included in the fiscal unit [A]. [C] on that day granted a loan of € 25 million at 9% to its German subsidiary [I] GmbH.

Prior to the transaction the sellers and the target company had agreed that upon sale certain employees of the target would receive a bonus. 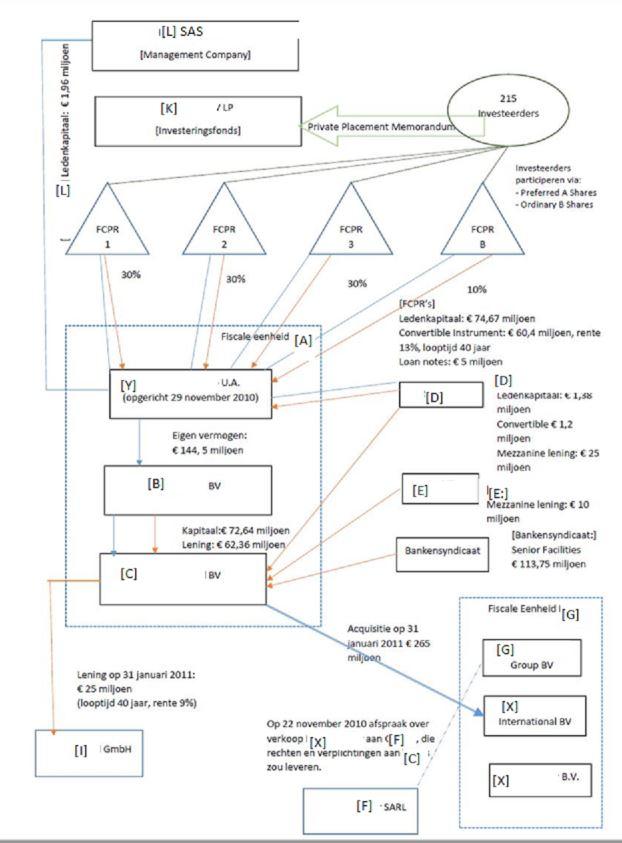 The Court ruled that (i) it is a civil law loan that (ii) is not a participant loan and (iii) is not inconsistent or carries an arm’s length interest and that (iv) art. 10a Wet Vpb does not prevent interest deduction because the commitment requirement of paragraph 4 is not met, but (v) that the financing structure is set up in fraud legislation, which prevents interest deduction. The Court derived the motive from the artificiality and commercial futility of the financing scheme and the struggle with the aim and intent of the law from the (i) the norm of art. 10a Corporate Income Tax Act by avoiding its criteria artificially and (ii) the norm that an (interest) charge must have a non-fiscal cause in order to be recognized as a business expense for tax purposes. Re (vi), the Court holds that the difference in treatment between interest on a loan to a joined tax domestic subsidiary and interest on a loan to an non-joined tax German subsidiary is part of fiscal consolidation and therefore does not infringe the freedom of establishment. Contrary to the Rechtbank, the Court ruled ad (viii) that on the basis of the total profit concept, at least the realization principle, the bonuses are not borne by the interested party but by the sellers.

Principle (i): fraus legis: The Court sees everything taken together, an acquisition holding with a target in a fiscal unity and artificially charged with an interest charge, seeking to polish away the taxable profit of the target without countervailing charge elsewhere and with improper frustration of (art.10a of) the Wet Vpb because in the economic reality it is a single centrally managed fund that has raised € 5.4 billion in equity for acquisitions, which is parallel reallocated along very closely with the Fund and intertwined hybrid FCPRs of choice that actually act as a tax haven, in this case partly to frustrate the bonding criteria and thus the interest deduction restriction, and through a commercially useless debtor made to the Dutch company to be added to the target. Advocate General Wattel does not consider the factual assessments and interpretations of agreements underlying this opinion to be incomprehensible; this also applies to the related factual conclusion that the decisive motive for the (financing) structure was anti-tax.

The Court subsequently saw a conflict with the aim and purport of (the criteria of affiliation and the double business test of) art. 10a of the Corporate Income Tax Act, but also with the aim and scope of the underlying broader standard, to be known from HR BNB 2015/165 (Mauritius), HR BNB 1996/4 and HR BNB 2009/123, namely, that tax law does not interest is recognized on loans that do not have a real (other than anti-tax) function in the financing of a company. The AG considers this legal judgment to be correct. Now art. 10a The Wet Vpb contains a double business test, in his opinion the judge can also apply that test when assessing whether that provision is evaded. HR BNB 2005/169 (the arm’s length of an acquisition implies the arm’s length of financing) is, in his view, obsolete by the Mauritius judgment: HR BNB 2005/169 was declared after art. 10a Vpb Act no longer a benchmark for external acquisitions; therefore not even when assessing possible circumvention of art. 10a Wet Vpb. The fact that the facts are different from those in Mauritius does not imply that there could be no business-like diversion / conversion of equity. Commercially useless intermediate steps can also be considered a diversion. According to the AG, the Court rightly ruled that an appeal to EU law cannot serve to cover abuse.

Principle (ii): per-element application of the fiscal unity regime to the interest of an EU subsidiary? Advocate General Wattel does not consider the treatment of the interest of a joined domestic subsidiary (invisible from tax) and of a German non-joined subsidiary (taxed) objectively comparable. In the case of a domestic addition, the interest burden on the subsidiary also disappears, while in a cross-border case that fiscal neutrality is actually broken (mismatch), resulting in base erosion. In his view, it follows from the CJEU EU cases X Holding, Lidl Belgium, Krankenheim Ruhesitz, and Timac Agro that the Netherlands is not obliged to import a foreign loss / interest charge in order to make taxation on domestic profit impossible if the Netherlands does not levy tax on those foreign charges / losses standing foreign profits, partly because fiscal neutrality of intragroup transactions is the essence of fiscal consolidation and cannot be reached unilaterally by the Netherlands due to a lack of jurisdiction. It follows from CJEU Groupe Stéria that the freedom of establishment does not allow taxpayers to determine tax jurisdiction for interest income and interest deduction at their own discretion, let alone to create deduction / no inclusion at their discretion. Cases N Luxembourg 1 and others require Member States to prevent abuse of (EU) law.

Principle (iii): passivation of the bonus obligation to the sellers or to interested parties? The Court held that the bonus payment obligation upon the withdrawal was borne by the vendors because (i) the removal involved total profit, so that good merchant use does not play a role and (ii) the likelihood of the bonuses not being paid should be negligible used to be. The AG considers the latter opinion to be factual and not incomprehensible. However, it does not seem correct to him that this is a total profit, but that does not, in his view, affect the judgment, since after all, the bonus payment was ‘as good as certain’ within the meaning of HR BNB 2000/269 even before the divestment, so that passivation could no longer be postponed on the basis of that judgment.

In the event that the Supreme Court considers the main appeal to be well-founded, Advocate General Wattel examines the incidental pleas:

(i) civil law classification of convertibles: unlike the Secretary of State, the Court has not seen a ‘civil-unambiguous situation’ in this case, since it has held factually and inexplicably that there was indeed an obligation to repay, which at the time of the provision of money did not say it could become that she would most likely actually not be able to be met and that she would actually have been repaid. The Advocate General considers that judgment in cassation unassailable.

(ii) participation loan? Partly in view of the desire underlying HR BNB 2018/60 to provide legal certainty by following the civil law form, Advocate General Wattel sees no basis for a more material test in ‘extreme cases’, except for terms that do not have an independent meaning, but he considers that category to be limited to cases of criteria evasion (such as a ‘fixed’ term of 95 years) or (also in a civil law sense) fake loans.

(iv) business-related interest charges ex artt. 8 and 8b Wet Vpb or business loan? Advocate General Wattel considers insufficiently motivated, or based on unreasonable burden of proof, the evidence that the Inspector has not proved that no third parties can be found who would participate under the same conditions. According to HR BNB 2012/37, the inspector must demonstrate that the agreed interest is not arm’s length and that, under otherwise the same conditions, no non-profit-dependent arm’s length interest can be determined. He does not seem sufficiently motivated that 13% interest-bearing additional interest per year is not ineffective because a transfer pricing report from PwC says so, although it concerns non-existent financing in the market and that report leaves the arm length of all other conditions undiscussed. The transfer pricing report and the mezzanine facility with which the Court compares are based on conditions other than those agreed for the convertibles, while the mezzanine provider is not an independent market party, but a member / convertibles provider. The Advocate General therefore considers this plea to be well-founded.

Conclusion: principal appeal in cassation unfounded; conditional incidental appeal not taken into consideration, but if it does come to an end, incidental means (iv) are justified.