A.3.1.2.              Most countries treat partnerships as fiscally transparent entities with flow-through treatment under which the partnership is ignored and tax is imposed on the partners according to their respective shares of partnership income. Other countries treat partnerships as taxable units subject to taxation as entities, including company treatment. Some countries such as the USA have limited liability companies which provide the benefit of limited liability and allow the entity to choose either flow-through treatment or treatment as a taxable unit. This is called the “check the box” system and the entities are referred to as “hybrids”. A feature of common law countries is the “trust” concept which is an obligation in relation to property which allows for concurrent legal and beneficial ownership of the trust property. A trustee will be the legal owner of property but holds the property on trust for the beneficiaries which may include both income and capital beneficiaries. While business operations may be carried on in some common law countries using a trust structure, MNEs would not normally use trusts to carry on business operations.

A.3.1.3.              One of the key decisions facing any MNE when expanding its operations to another country is the type of legal structure it will use to operate in that jurisdiction. The alternatives for an MNE are to operate abroad through locally incorporated subsidiary companies (associated enterprises) or operate abroad using permanent establishments (branches). Foreign subsidiaries may be either fully-owned by the parent company or partly-owned.

A.3.1.4.              An MNE is a group of companies or other entities and under the company law of the country in which each company is incorporated it is a legal entity. This choice of legal structure will be affected by a number of factors, apart from the tax implications, including:

A.3.1.6.              MNEs may also carry on business abroad through a partnership or joint venture. In most jurisdictions partnerships are not legal entities and are fiscally transparent. For a partnership to exist, an MNE would require other entities to be partners such as independent entities or subsidiaries. Joint ventures involve independent companies working together on a specific project and a joint venture party may include a government or a government authority. The business structures used by an MNE may change over time such as, for example, commencing operations in a jurisdiction using a joint venture structure and then buying out the joint venture partner and operating in that jurisdiction through an associated enterprise. An MNE may also operate abroad using an agent, which may be an independent agent, a dependent agent or a commissionaire.

A.3.2.       Companies and Permanent Establishments

A.3.3.1.              In a functional structure an MNE’s functions are performed by the employees within the functional divisions. These functions are usually specialized tasks, for instance the information technology engineering department would be staffed with software engineers. As a whole, a functional organization is best suited to a producer of standardized goods and services at large volume and low cost to exploit economies of scale. Coordination and specialization of tasks are centralized in a functional structure, which makes producing a limited amount of products or services efficient and predictable.

A.3.3.2.              Under a divisional structure, each organizational function is grouped into a division with each division containing all the necessary resources and functions within it, such as human resources and accounts. Divisions can be categorized from different points of view. The distinction could for example be made on a geographical basis (e.g. a China division or a West Africa division) or on a product/service basis (e.g. different products for different customers: households or companies). For example, an automobile company may have a divisional structure with a division for hybrid cars and another division for other cars with each of these divisions having its own sales, engineering and marketing departments.

A.3.4.1. An MNE customarily maintains, parallel to its statutory accounts, a set of management accounts to mirror its operational structure in order to measure and report on the effectiveness of each operational unit for management purposes. Some of these divisions may be classified as cost centres for management account purposes (e.g. the human resources division) whilst others may be classified as profit centres (e.g. the product/services division). It is often challenging for an MNE to attempt to segregate the corporate and statutory financial statements to reflect the organization’s operational structure.

A.3.5.1.              The aim of MNEs is to maximize profits from producing goods and services. The key feature of an optimal MNE business is to produce a profit from exploiting resources which produce property or services of greatest economic value. A useful starting point to understand how an MNE operates is a value chain analysis which will also form the basis for a transfer pricing functional analysis. An MNE’s value chain is used to convert its economic resources of lower value into economic resources of higher value which may involve the following steps:

Company 1 in Country A is an R&D company carrying out research and also undertaking activities relating to the design of products for the entire group. A company of this nature would employ technical personnel such as engineers and scientists.

Company 2 in Country B is a fully-fledged manufacturing company (i.e. not a limited-risk contract manufacturer, for example) which also performs some functions on the design and practical application of its products.

Company 3 in Country C is responsible for the marketing, distribution and after-sales functions within the group.

MNE Group B uses two subsidiaries which perform some of the functions across the value chain and the group also outsources some of the activities to third parties:

Company 1 in Country A is an R&D company and carries out all the research and design activities in relation to the company’s products. This company is similar to Company 1 of Group A, apart from the fact that the design function is fully located in Company 1 and not partly carried out by Company 2.

Company 2 in Country B is the company responsible for marketing and customer service. This company is therefore the customer interface for the group.

The MNE has decided to outsource the production and distribution functions to third party companies.

MNE Group C uses three companies to perform the same functions in different geographical locations using intangibles developed by a third party, which would typically be used by the group under licence.

A.3.5.4.              For example, in MNE group A (see Figure A.1 below) the value chain is defined as Company 1 performing R&D, Company 2 manufacturing, and Company 3 distributing the MNE’s products. The value chain, however, may be different depending on the legal and contractual arrangements between the companies.

A.3.5.6.              A different possible context of exactly the same value chain could be that Company 1 performs R&D on a contract basis for Company 2, which is the legal owner of any intangible property developed through that R&D; and Company 3 acts as a limited risk distributor through a contractual arrangement with Company 2. In this case, Company 2 is the legal owner of the intangible property of the MNE, and bears substantial risk associated with the manufacturing and sales of the MNE’s products.

A.3.5.7.            A different possible structure of the same value chain could be that Company 1 performs R&D on a contract basis for Company 3, which is the legal owner of any intangible property developed through that R&D; and Company 2 acts as a limited risk contract manufacturer through a contractual arrangement with Company 3. In this case, Company 3 is the legal owner of the intangible property of the MNE, and bears substantial risk associated with the manufacturing and sales of the MNE’s products. 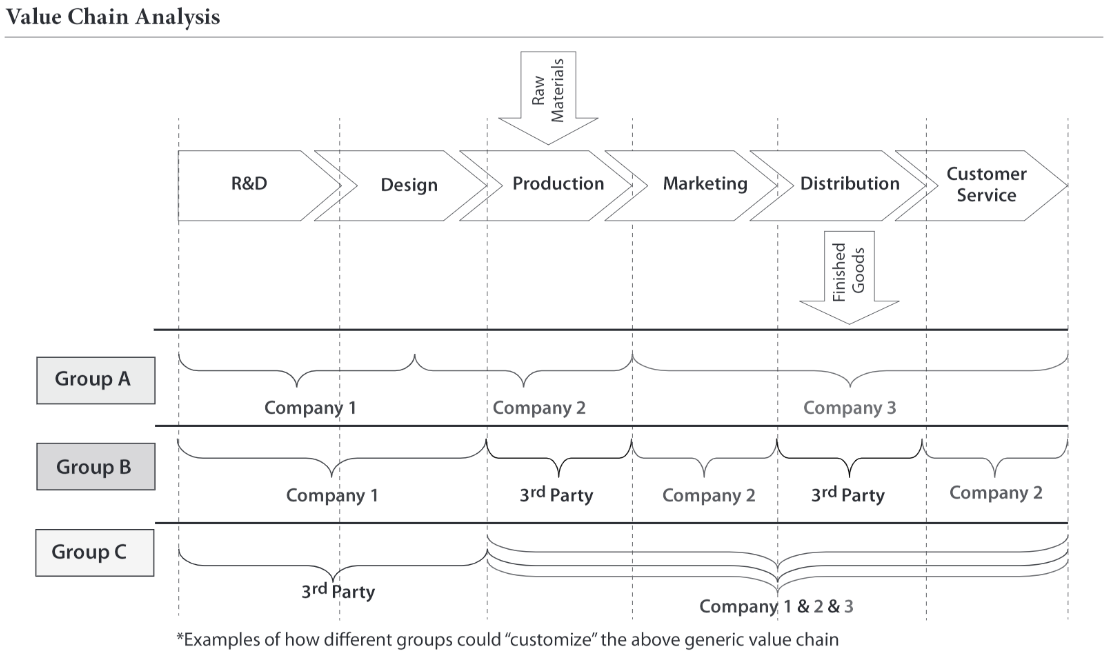 A.3.5.8.              As will be discussed in subsequent chapters, each of these different contexts would very likely result in different transfer pricing outcomes.15